Fellow Republicans, we are fully into Primary election season now! On any given Saturday you can find a handful of the candidates at various events. The party will be hosting a forum for the state office candidates on February 6th at our general meeting and we invite everyone to come out to meet the candidates and listen to what they have to say.

As a reminder, absentee ballots are going out now, one-stop early voting starts February 13th, and primary election day is March 3rd. By NCGOP policies, the party cannot endorse a candidate in the primary election. But, if you wish to help a particular candidate, reach out to them and tell them you will volunteer. They will welcome any and all help.

Additionally, we would like to express our gratitude to the County Commissioners on their passing of the Second Amendment resolution on Jan 21 at their regular scheduled meeting. Their unwavering support of our Constitutional right was reaffirmed with the passing of a resolution similar to other counties surrounding the Charlotte region. The text of the resolution was published by the party on our Facebook page. If you do not have Facebook, you can click here and it will take you directly to the resolution.

All Republicans are welcome to attend.

Come hear from local candidates running for state house in the 82nd and 83rd Districts as well as a few state wide candidates.

Meet and greet for Mark Robinson for Lt Gov Campaign. This event is not sponsored nor endorsed by the Cabarrus GOP, we are simply publishing at their request. 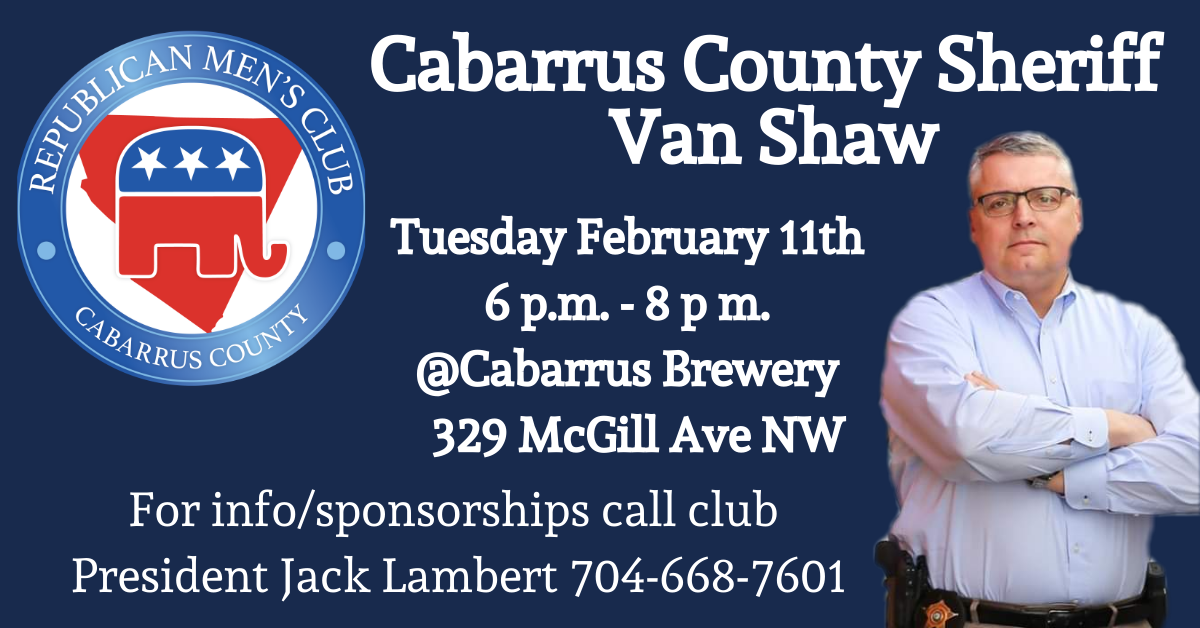 The Men’s Club will be hosting Sheriff Van Shaw at our monthly meeting. We hope to see everyone out for this event.

Meet and greet for Greg Gebhardt for Lt Gov Campaign. This event is not sponsored nor endorsed by the Cabarrus GOP, we are simply publishing at their request.

Below are the candidates you will have the opportunity to vote for in the March 3rd Primary. Ballot placement is determined by a random draw of a letter from a hat at the State Board of Elections. This year the starting letter is the letter “O” and it is alphabetical from there. The order the names are listed in below are the correct order you will see the names displayed.

The following Republican candidates do not have a primary. You will not see their name on the March 3rd Ballot; however, they will need your vote and support in November.

Committees
Committee chairs and committees have been established. If you wish to still serve on a committee please drop Anita Brown an email to express your interest in doing so. We welcome registered Republicans to help with Events, Programs, and Precinct Development Committees as well as CCGOP office staffing. Let us know how and when you would be available to help! We are going to need “All hands on deck” as the election season proceeds!