Fellow Republicans, the Primary Election is on March 3rd. Do your research on the candidates and head to the polls. Absentee ballots are going out now, one-stop early voting is ongoing till Saturday February 29th at 3:00 pm, and primary election day is March 3rd. Polls on election day will be open from 6:30 am till 7:30 pm.

By NCGOP policies, the party cannot endorse a candidate in the primary election. But, if you wish to help a particular candidate, reach out to them and tell them you will volunteer. They will welcome any and all help.

After the Primary, we ask for everyone’s help in getting all the signs picked up. Brian King has graciously offered a space behind his office for us to drop off the signs. Pick up all Republican signs when you see them and bring them to the drop point.

51 Means Avenue, Concord
(behind the building)

Please stack them up by candidate as best as possible. Additionally, we would like to suggest that when you and candidate volunteers head out to pick up signs, we ask that you take a garbage bag with you and pick up any garbage around the signs as well. Let’s all help clean up Cabarrus County and make it a more beautiful place!

All Republicans are welcome to attend.

No general meeting this month. See you at the convention!

Registration will be from 8-9 am. Precinct meeting start at 9 am and the County Convention starts immediately after. We promise to do our best to keep registration errors to a bare minimum and the certification of the credentials will be much quicker. We should be out no later than noon and hope to be concluded with business even earlier!

If you wish to be a delegate at the national convention, you must attend the County Convention and District Convention. 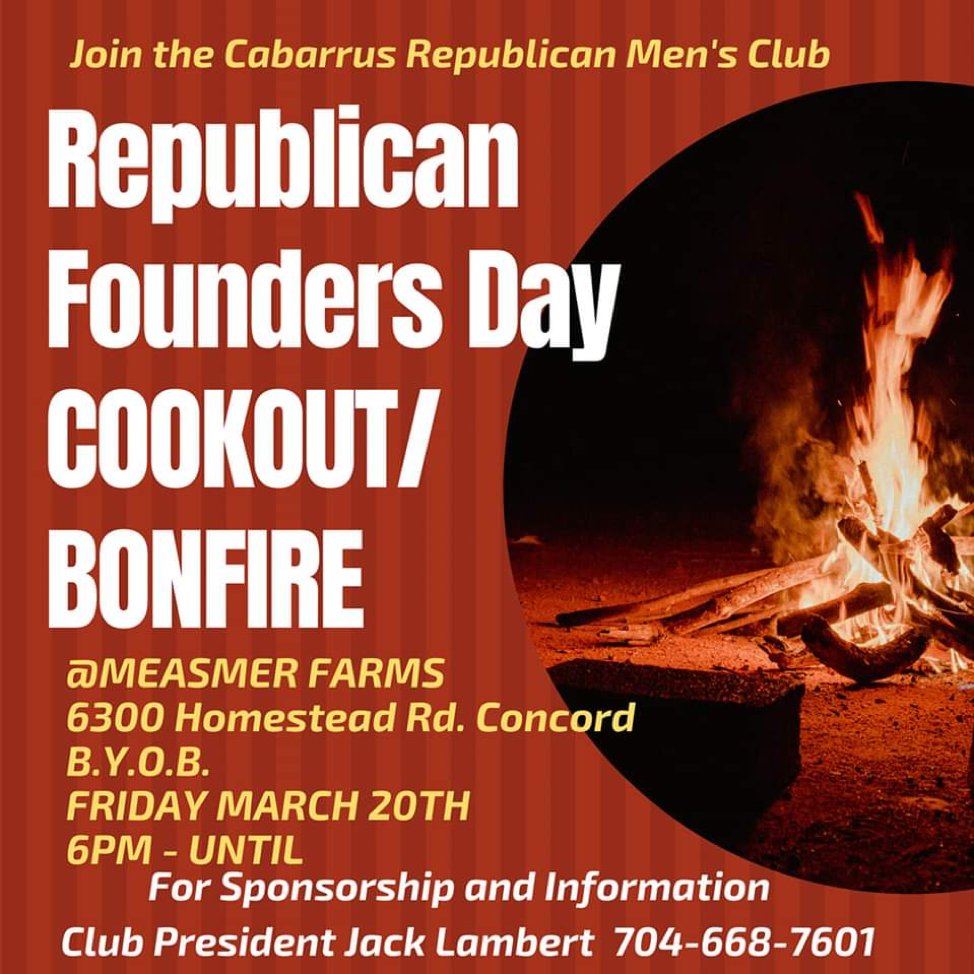 Below are the candidates you will have the opportunity to vote on in the March 3rd Primary. Ballot placement is determined by a random draw of a letter from a hat at the State Board of Elections. This year the starting letter is the letter “O” and it is alphabetical from there. The order the names are listed in below are the correct order you will see the names displayed.

The following Republican candidates do not have a primary. You will not see their name on the March 3rd Ballot; however, they will need your vote and support in November.

Committees
Committee chairs and committees have been established. If you wish to still serve on a committee please drop Anita an email to express your interest in doing so. We welcome registered Republicans to help with Events, Programs, and Precinct Development Committees as well as CCGOP office staffing. Let us know how and when you would be available to help! We are going to need “All hands on deck” as the election season proceeds!