Fellow Republicans, what a September it has been! First off the fair was a huge success thanks to our volunteers. There were many visitors to our booth of every age who wanted their picture made with our President!

Then the Republicans in the 9th and 3rd Congressional Districts swept their elections. Particularly the 9th district race just down the road was considered a bell weather election for President Trump. Many pundits thought that if Dan Bishop had lost, then it potentially would have spelled bad news for Republicans in 2020. However, shortly after the last votes were counted, these same pundits were walking back these statements. A few members of the Cabarrus County GOP knocked on doors and worked election places for Dan and Congressman Bishop would like to extend his sincere gratitude to those that helped him get across the finish line.

Then court ordered redistricting for the state house seats looks to have a neutral effect on the county, much to the dismay of the Democrats (see below). Then while the Democrats had a miscommunication and were off doing who knows what (speculation is violating a court order and drawing new district maps out of the view of the public). The speaker and Rep Saine from Lincoln County choose the opportunity to take up the budget veto override. Most everyone has seen the most obscene lack of decorum displayed by Democrat Rep Butler (New Hanover County) with her yelling and screaming on the House floor. The end result is the House has now overrode the veto and Senate plans to take action sometime in the first part of October.

To top all of this off Congresswoman Nancy Polosi has decided to launch a semi-official impeachment inquiry against our President. Historically, the party going into a midterm holding both houses of Congress and the Presidency tend to lose Congressional seats. The same can be said for the party bringing impeachment proceedings against a sitting President. We need only look at the impeachment of President Clinton and the decimation of the Republican seats in the house after they voted to impeach.

What will October bring? Make sure you tune into this newsletter and find out!

A MAJOR THANK YOU to the 40 plus individuals who helped staff the CCGOP booth at the Cabarrus County Fair last week! We had an exciting and vibrant booth because of you! We had a great mix of seasoned fair volunteers and many first timers!

Every volunteer showed up on time and readily, even eagerly, engaged with hundreds of fair attendees! There was a lot of enthusiasm among our booth visitors, especially for re-electing President Trump, as well as interest in our Republican Party activities and focus on upcoming municipal elections.

AND we registered 38 voters! Fabulous effort for the Fair! Yeah CCGOP Team!

We would not have had such a great success without each and every one of you!

Remember early voting starts for municipal elections on October 16th and ends on November 1st. Please vote for these Republicans and show them some support as you are able.

The North Carolina General assembly by order of the Wake County District Court was mandated to redraw many of the State House and Senate districts throughout the state. The Court said that too many districts were drawn with political gerrymandering in mind. Don’t forget that the US Supreme Court said that the court did not have the ability judge gerrymandering at the federal level just several weeks prior. Now the state court used the statement that gerrymandering prevents the “free and open” access to voting and mandated that the drawing of the new maps was done in a manor that did not take politics into consideration. Additionally the court mandated that the maps had to be drawn in full view of the public eye. The General Assembly setup web cams and was broadcasting the rooms from the time they opened until the closed each evening. After a whirlwind few days of hard work the maps were set. Our very own Sen Paul Newton chaired the Senate map redrawing process and he should be commended when you see him for the hard work he put in that week! Our Senate district was not up for redistricting; but, our house districts were. Below is an image of the passed districts. These districts still need the approval of the Court before they will be finalized. The best guess on this will be sometime in the later half of October. An early analysis shows that the new HD 82 will be a bit more competitive; but, still leans Republican and HD 83 is now an even stronger Republican district. 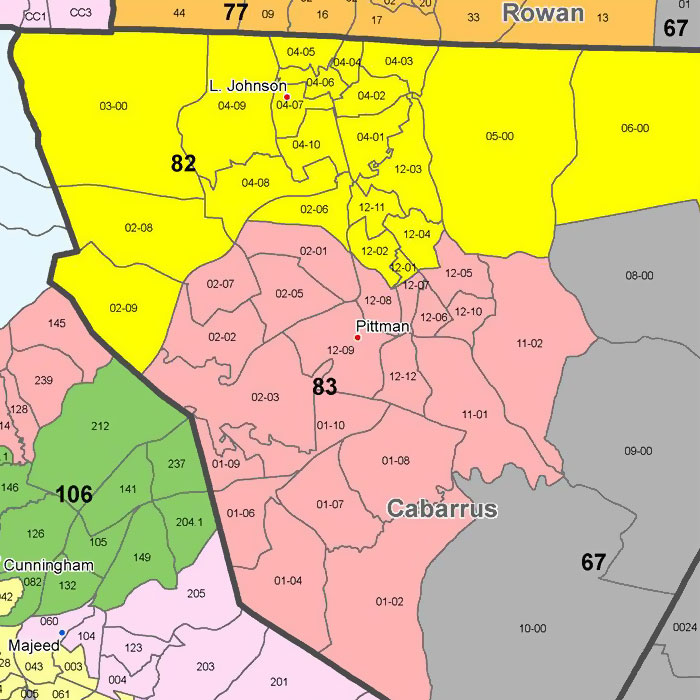 All Republicans are welcome to attend

Special Guests:
This will be the opportunity for the candidates to have a few minutes on the agenda to explain why we all should be voting for them. Come out and meet these candidates that have taken that step to have their name on the ballot.

The Cabarrus County Republican Men would like to invite everyone to come out and hear from our Republican town and city council candidates as they are in the final stretches their campaigns. Breakfast at 8:30 and the meeting begins at 9:00 AM. Everyone is welcome. Men, women, boys, and girls.

All Republicans are welcome to attend

Vendors for RNC 2020
If your business would like to participate in the Republican National Convention please fill out the Charlotte Host Committee's interest form. Go to www.charlottein2020.com and click on "Vendor Signup."

Committees
Committees have been established for 2019/2020. However, if you have previously served on a committee and or would like to serve on one of the committees listed below please drop Anita an email to express your interest in doing so.